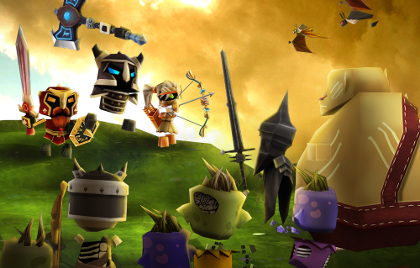 We are proud to announce that our most awaited release, Elements: Epic Heroes, is already live in the store for Windows Phone!Elements: Epic Heroes is the best hack’n’slash game seen on mobile. You will we able to build up a team of blocky heroes that will defeat the Dark Lord in an epic battle at the Kingdom of Elements.Join a classic fantasy quest through monsters, dungeons and castles in rich 3D environments, solo or with your friends in a multiplayer scenario.Take a look at the promotional video here:[embed]https://www.youtube.com/watch?v=R16s_CotMn8[/embed]Key features:- Control a team of up to 3 heroes with simple, intuitive touch controls.- Play heroes of different classes, each represents its own Element.- Complete lots of missions in different locations and slay bosses with unique skill sets for awesome loot reward!- Defeat giant raid bosses with your friends in fully Online Multiplayer experience!- Team up with friends, socialize with them and show off your epic gear.- Rich character improvement: lots of unique and upgradable weapons and armor, unlockable skills and more.- Achievements and challenges- Downloadable for free- Supports devices with 512MB of memoryDownload the game for Windows Phone here: