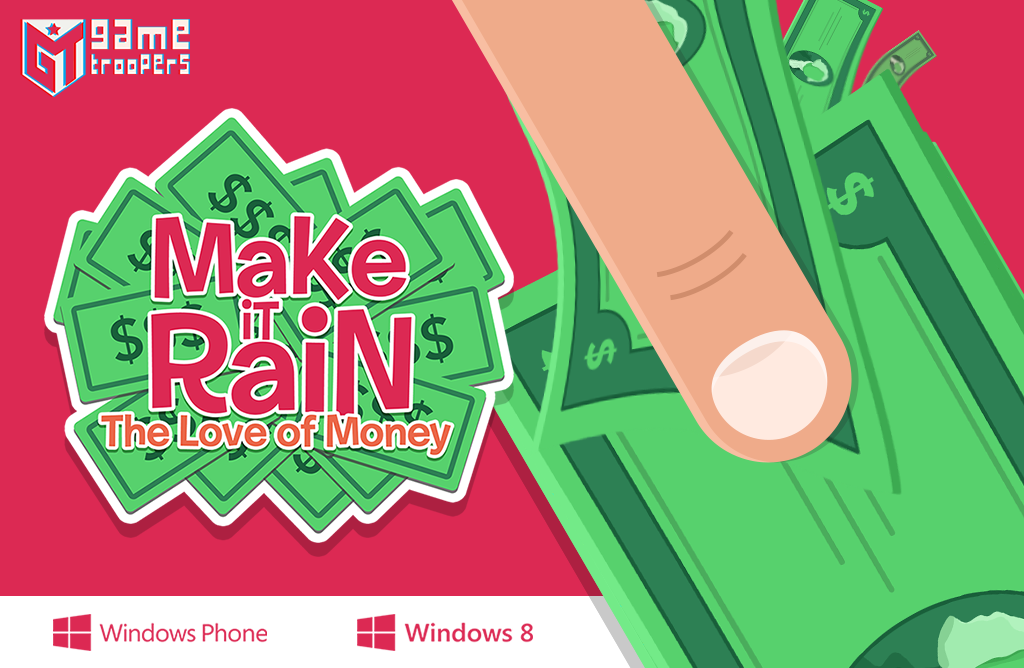 NEW YORK, NY – The new Windows Phone publishing startup Game Troopers today launches its second title, Make it Rain: the Love of Money.Make it Rain is a smash hit that reached number #1 overall in the App Store, has had 12 million downloads on iOS and Android, and is coming to Windows for the first time today.The game is a delightful and compelling parody of the thoughtless drive to accumulate money. Humorous investments include a cigarette factory, old lady smuggling, a clown college, a banana stand, and a candy theft ring.Game Trooper’s specializes in bringing world-class games to Windows Phone. “Game Troopers is able to launch Make in Rain in a way that we could never do on our own,” said Ari Kardasis, one of the programmers of Make it Rain. “They ported the entire game to Windows Phone for us and we are expecting very big download numbers at launch.” Make it Rain will be featured by Microsoft in the Windows Phone app store around the world.The last game to be launched by Game Troopers was Tiny Troopers, which received more than 1 million downloads in just 5 weeks and was backed by global promotion from Microsoft. The game has now received 2 million downloads total and growing. Game Troopers is designed to help game studios easily bring their games to Windows Phone, and takes on the porting and promotional work.“In many cases, we will even do the coding to get the game running on Windows,” said Nicholas Reville, a co-founder of Game Troopers. “We want to make it easy for developers to decide to bring their game to Windows. It shouldn’t add any extra stress for your team.”Game download link:http://www.windowsphone.com/s?appid=4530a148-26d4-47de-b1be-4b65934d01aeYoutube trailer:https://www.youtube.com/watch?v=b6d1uwPrm1g&feature=youtu.beFree assets:http://www.plungeinteractive.com/external/MIRTLOM/pr/MIRLOM_promo.pnghttp://www.plungeinteractive.com/external/MIRTLOM/pr/MIRLOM_promo2.pnghttp://www.plungeinteractive.com/external/MIRTLOM/pr/MIRLOM_promo3.pngScreenshots (alternative to the ones in the store):https://www.dropbox.com/sh/mef09bdvtkbxy0k/AADvaMCx6OL4PGtxHCfDEnjma?dl=0Contact game troopers:pr@gametroopers.netGame Troopers website:https://www.gametroopers.netSocial networks:Twitter: @gametrooperswpFacebook: https://www.facebook.com/gametrooperswpGame Tropers logo:https://gametroopers.net/pr/gt_logo.tifhttps://gametroopers.net/pr/gt_logo3d.tifGame Troopers terms of use:https://gametroopers.net/pr/terms_use.pdfGame Troopers privacy policy:https://gametroopers.net/pr/privacy_policy.pdf https://gametroopers.net/wp-content/uploads/2015/02/MIRLOM_promo-600x391.png